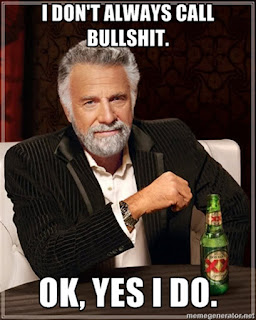 I call bullshit where I see it, and I’m not going to stop, despite the letters from a motivational speaker disguised as The Universe, despite Internet memes that spread like a plague of Airwick flowers, despite those who let go and let karma, and despite the conscious breathing I’m doing in the new year.  Bullshit needs its callers.

Every day, someone I like passes on one of those misattributed stories or partial truths or total hoaxes.  Once, when I Snopes’d someone (yes, I just verbed a proper noun—is that bullshit?), she wanted to know who made me the Internet police.  Ouch.  But take the five seconds to enter that thing you’re sharing into a search engine to check the veracity, or the bullshit callers will be on you like flies.  It’s not just a lie, and it does more than stink.  If you don’t believe me, try becoming the victim of a rumor or admiring the emperor’s threads in front of people who know he’s naked. Smart people. People you want to impress.
This photo is making the rounds (complete with extra comma and comma splice): 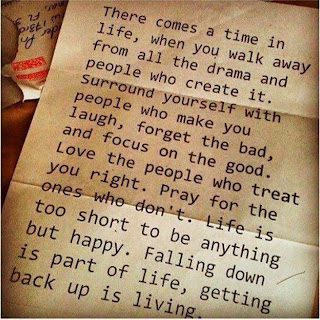 It’s tough to argue with the good advice that warns us away from the drama of others and steers us toward people who love us.  So by all means: weed out the folks you don’t need in your life.  A regular weeding is good for the friend garden.
But if your friend is an asshole, please supply a swift verbal kicking before you pluck him.  Because a prayer only sends that asshole out to leave his bullshit in a bag at someone else’s front door.
It may surprise you to learn that even assholes have feelings. In fact, all but the sociopaths and narcissists among us really don’t want to be thought of as assholes; some don’t even know their behavior is asshole-ish.  But it’s not enough to tell someone his behavior sucks if you continue to reward him with the pleasure of your company or an action that says it doesn’t really matter to you.

“You know, you come over and eat all my food and drink all my beer, and you never contribute anything.”

Will your complaint and its consequences precipitate a change in your friend? Depending on the friend, probably—but at least possibly.  And if it isn’t worth the effort to save the friendship (some relationships aren’t healthy for a host of reasons), at least send a mean person off with a performance review.  Praying for a meanie doesn’t heal the meanie or your heart, and it doesn’t make you a better person.  What does?  The favor of telling him why it didn’t work out.  After all, when you get fired from your job, don’t you want to know how to prevent the same fate with the next one?

Yes, life is too short to surround yourself with assholes (regardless of the validity of having happiness as a goal).
Last year, my motto was ask for what you want.  I still live by that, and it works.  I don’t mean you always get it; I mean you learn to stop wishing in silence and act toward a goal.  If you don’t get what you want or need, you move on—sometimes just to a slightly altered goal or a step closer to it or to a workable compromise.

Asking for what you want works with friendships, too.  If your friend is an asshole, it might be simply that you didn’t ask him to stop being one, which is like asking him to continue being one.

Here’s a second message co-opted from the Book of Face.

I had a friend who let everyone borrow money, and no one ever repaid her.  When they needed more, she reminded them, gently, about their prior debts, then she forked over more cash. She asked me why so many people took advantage of her, and I said: Because you let them.
Those people who create drama in your lives create it because you let them, and simply cutting them loose might not help you.  (It sure doesn’t help the rest of us!)
In truth, most people are damaged.  If we love them, we help them mend the cracks as best we can, and they help us mend ours.  But people who don’t treat us right don’t need our prayers.  They need a bullshit caller.  And maybe so do we.
This entry was posted in Uncategorized.