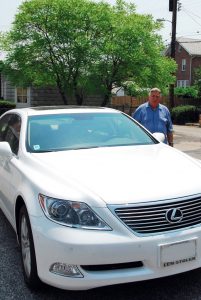 One of the biggest challenges about my father, second only to being a passenger in the car he was driving, was buying him presents.
Usually, we’d combine his birthday gift with his Father’s Day gift to save ourselves the stress. Because he was so thoughtful with ours (he’d call a month before our birthdays, when we were cooking dinner or doing homework, expecting an immediate answer to the question of what we’d like him to buy us), we always wanted to get him something special, memorable, useful—more out of love than obligation.
Every so often, we’d get a good idea, and we’d milk that for as long as we could. Because my dad owned a paving company, and because alligatoringwas a thing that happened to asphalt, we started an alligator collection for him.  He’d smile at the inside joke and set the paving stone or paperweight or bottle opener or sculpture or mosaic down on the table, and my mom would find a place for it. 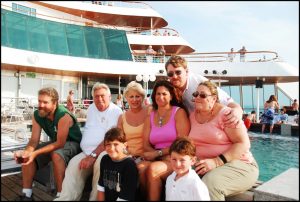 The rest of it—bathrobes, sweaters, ties, socks, wallets, money clips—stayed in their boxes for years because he didn’t need anything.  There was a good shot he’d wear it if it had a horse on it, though, so we’d bought him a rainbow of Polo shirts, beach towels, shorts, and enough cologne to drown a polo pony.
Sometimes we’d buy him gift certificates that he’d lose under the seat of his car or CDs he wanted but which still had the shrink wrap on them when he died.  The things he treasured the most were the XXL sleep shirts with his grandchildren’s photos ironed on them. In fact, Beth would pay for the shirts and transfers, and I’d take the pictures and do the ironing.
The last few were a large. We took them to the rehab center on Christmas, and he cried.  I’d only seen him cry maybe one other time in my life, and that was when hisfather died.  I’m wearing one of those shirts now, a photo of Serena kissing Marcus. My dad never got to wear it. 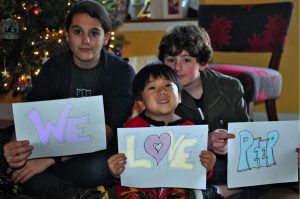 I have been in a bad mood for eleven months. If I ever had patience, it left with my father. I’m easily frustrated, often angry, moody, pensive, and very lonely.  It would be easier to count the days I didn’t cry on my way to work.  I am like a gurgling volcano. It’s very hard to tell when it’s safe to come near me.

On July 5th, the anniversary of his death, I expect to ooze hot lava for three days, until the headstone unveiling on the 7th, when I will be done erupting and will begin to cool down.  I might have a little residual steam, but I’ll probably be safe for the tourists.
Yeah. It’s going to happen just like that.
This entry was posted in Uncategorized and tagged birthday, dad, death, driving, father, presents.