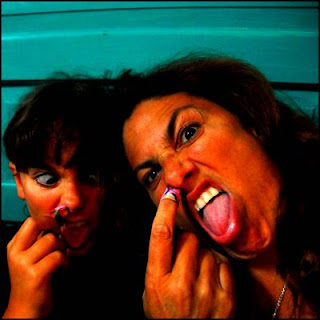 “I liked my old fun Mom.” That’s what my daughter said to me while I was brushing my teeth and moaning in agony last night, after having gotten a spinal cortisone shot.

Part of me felt sorry for her, having to watch me suffer every day and cry, unable to do anything to comfort me. Part of me felt ashamed for letting my daughter see my cry so often (to my credit, she was supposed to have been in bed, where I had just kissed her goodnight). But the third part of me—because we are all divided in thirds—thought: I used to be fun? 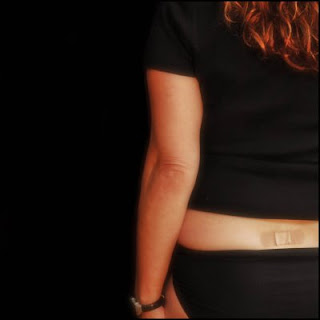 There is nothing easy about constant pain. Years ago, my husband asked me why I was so angry, why I yell all the time instead of just answering a question. I told him that’s the way I was raised, that my family answered loudly (a notion my mother objected to on the phone today, just before she screamed at my father, and then she had to admit it). I realized later that chronic pain simply makes a person cranky. Remember that pain chart? I’m truly always at that five, and being at a five takes its toll.

Being at a nine stresses out everyone, even the people who don’t love you. Even the doctors. Yesterday, at the pain clinic, I cried a dozen times. Everyone who worked there was cheerful and sympathetic; they see people like me all day, every day, and even if they can’t relate, they understand.

But the doctor suggested, before giving me my shot, that I go on Cymbalta. He said that in low doses, it helps chronic pain. It also takes the edge off the depression and anxiety that go with pain. He thinks that it, in conjunction with the shot, will provide just the relief I may need. He said the same thing to my husband, though with Marty, the doctor called them “mood swings” and said he could see that I was suffering from those, too.

Part of me thought that doctor was getting major kickbacks from the drug company! Marty had three samples in his briefcase. Another part of me thought he was really trying to help. How good of him to inform my husband (don’t worry: I indicated on my privacy form that the doctors could talk to my husband without fear of a lawsuit) about my misery, impress upon him how much physical and emotional distress I have suffered.

But that third part of me—because we are all divided in thirds—thought: Men! They just have to stick together, don’t they? This is the kind of doctor who would give some nice drugs to the husband of a woman in labor. He’s the kind of scientist who invented a drug for PMS. Oh, hey, it helps the women primarily, but don’t be surprised to find, on that mile-long patient information sheet—that one of the side effects of Cymbalta (besides diarrhea, nausea, vomiting, dizziness, tiredness, blurred vision, tinnitus, and general brain numbness) is “happier husband.” 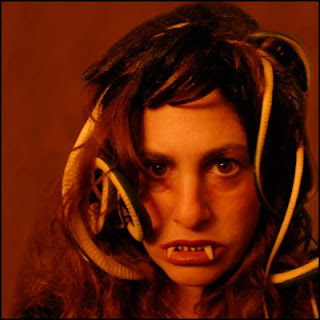 The shot hurt. Don’t let anyone tell you it is only mildly uncomfortable. It hurt, and then it hurt all night. That’s why I was crying while brushing my teeth (and inhaling my Advair and watching TV and sleeping). And I’m told I won’t begin to feel relief until three to eight days from administration of the shot.

This morning, though, I woke up without that achy feeling of having slept wrong all night. I got out of bed without the painful, halting wrench. I walked into the bathroom smoothly, without the feeling that my tailbone was carrying a lead anchor. I took the stairs with only one foot on each tread and walked briskly to the kitchen, where I announced my decreased pain to everyone. Even on the deck this morning, practicing walking, I shouted to my neighbor, “I can walk!” and she noticed, from that far away, that I was standing up straighter.

No one could have been more relieved than my daughter. The other day, I took her to Rock School and used one of the lesson rooms to lie on my back with my legs on a chair. Another mom noticed and told me she, too, is suffering from a herniated disk. When Serena finished her lesson, she overhead the mother telling me how she’d been alternately yelling at her kids and crying for several weeks. I could see my daughter’s ears perk up.

When we left the building, she asked me, “Doesn’t it make you feel better to know that someone else has the same thing?”

Because pain turns off nearly all of your normal better instincts (like when two skinny girls tell you they’re on diets, and you compare the diet instead of saying, “Are you crazy, you skinny things?), I said no, it didn’t please me to know someone else was miserable. It didn’t ease my pain at all and only made me feel sadder.

“Well, it sure makes me feel better.”

I realize now that she’s been frightened for these few weeks—worried that I had some awful disease and was going to be crippled or dead or, worse, like this forever. Mean. Sad. Old. Unfun.

I hope this is the beginning of the end of my back pain. I don’t think any of us can take it anymore. I walked by a mirror this morning and almost didn’t recognize the profile of the woman reflected in it. What had happened to the hunched over crone, the witch who carried an apple to the front door of the seven dwarfs? Granted, she had some great hair, but she walked like a hag.

I never want to see her again.

This morning, I put on my underpants without holding the dresser. I practically hopped into them. Maybe soon I’ll be able to jump into my Fun Mom suit.

I never want to take it off.

This entry was posted in Uncategorized and tagged daughter, essay, mother, motherhood, pain.