By Leslie F. Miller | Published August 19, 2014
This open letter was rejected by McSweeney’s. Only the best rejections for me.
Dear Lady Who Reserved Twelve Feet of Beachfront Property by Placing Two Chairs Ten Feet Apart,
Please forgive me today for breaking the invisible force field between the Tommy Bahama “The Coolest Spot in Paradise” beach chair and the blue no-frills version, both of which sat peacefully at the water’s edge this morning, hypnotized by the hazy sun, lulled by the white noise of crashing surf.

I should have felt the chairs’ almost-psychic connection—and indeed would have had I not gotten so much sun the day before, my skin a leathery, impenetrable shield that wasn’t even tickled by the electricity emitted by this meant-to-be pair.
So when you called from the blanket behind us and excused yourself to tell me “that’s my chair” as I put my own between the two—still so far from either that I’d have had to yell to them over the waves slamming the sand after last night’s storms were we to converse—I was not at all being facetious when I asked if you’d like for me to move it closer to its friend (its lover?). Blame it on vacation brain! Blame it on being a mom traveling alone with teenagers. (Or blame it on the fact that one chair was a pillow-clad, mesh-pocketed, deluxe model, the other a one-position chair equipped with nothing, not even a colorful Coors Light ad on its back, though perhaps the pricey one came from Costco and the other from Sunsations, where it was likely to cost just as much, so who am I to judge?) 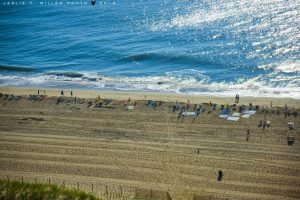 It’s an endearing little custom of your people, that of sending the men out in the early morning to plant the tent legs and umbrellas in the prime spots, dig them in hard against the high tide coming along in two hours, and space the chairs so they get the proper breathing room. They work so hard, those chairs, stuffed for 358 days in cramped lockers under the sundeck. They deserve their freedom. After all, I get a whole cubicle to myself for nine hours five days a week, with weekends to move about freely.

Besides, they got here first. What am I doing at 7:00 a.m. but lazily wiping counters and folding laundry between sips of coffee on the 15th floor of the Capri, staring longingly out the salt-crusted window as a striped canvas forest unfolds before my eyes, a panorama of umbels breaking ground and blooming all at once, big swaths of wild umbrellas a wildlife preserve for bikini- and tankini-clad wives and mothers who will finally come to keep their belongings company after a leisurely breakfast at 10, the ice in their red plastic cups watering down the mimosas and bloody Marys in the elevator.

I’m sorry, your red plastic cup. Your melted ice. And then you have to stand there and endure the likes of me, my age- and sea-addled brain just not getting it, just not comprehending that empty chairs—like so many blankets and towels lying out on cruise chaises at 6:00 a.m.—deserve their rightful place in the front row.
I am humbled by my mistake and, truth be told, a little embarrassed. So I apologize not only for myself but for my chair, a blue Tommy Bahama “The Coolest Spot in Paradise” chair,  borrowed from my sister, which demanded that we sit arm-in-arm with yours and which was crestfallen when you moved it.
Couldn’t you feel the connection? If not, you’ll probably get another chance. We’re here till Friday.
Best,