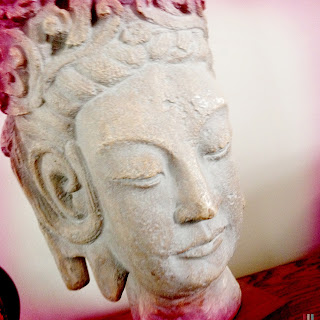 On the oak bookshelf in Jim Hill’s treatment room—or torture chamber, if you’re me—sits a stone bust of Quan Yin (Kwan Yin, Kuanyin, Guanyin), Chinese goddess of mercy.  If you’re me, she’s an ironic figure, considering that my cries during his weekly shiatsu-acupressure treatments do not temper the intensity of Jim’s elbow jabs or finger pokes.  Then again, Quan Yin lives in the suffering.
Quan Yin means one who sees and hears the cry from the human world.1  She hears prayers and observes sounds.  And this is Jim, who, during treatment, will often stop what he’s doing to fix a pain in me that he can feel within himself.
If you’re me, you don’t believe in any of that mumbo jumbo until it happens to you.  And it happens every week.
I covet that bust.  I want to cover it with shards of pottery.  Sometimes, when I’m in the thick of it during a two-hour treatment, I’ll meditate on Quan Yin, who, until today, I thought was a skinny, female Buddha.  I close my eyes and breathe and think about her beauty and watchfulness and all the broken teacups I would glue to the flat bridge of her nose.  I think about her mosaic head and about spring.  I think about a strand of beads, too. 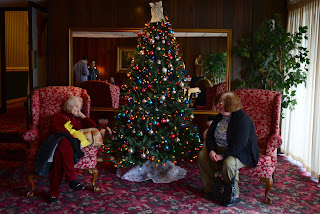 Jim and his wife Karen make jewelry—glass beads and whatever can be made from them.  Some are Klimt-like, ornamental for ornament’s sake.  Juxtapose Jim—he of the comfortable sandals and chokers and new-age spirit (he even teaches t’ai chi) with glitzy, decadent beads and flashy, hand-made findings, golden curlicues sprouting from necklaces like tentacles.

I first met the Hills at the Out of Hand craft fair at the Knights of Columbus Hall in Homeland probably 15 years ago.  My mom had bought something from them—it might have had a Klimt painting as the center medallion—from the ACC Craft Fair.  Out of Hand is held each year on the first Sunday in December, and it’s an annual tradition for me, my mother, and my sister. 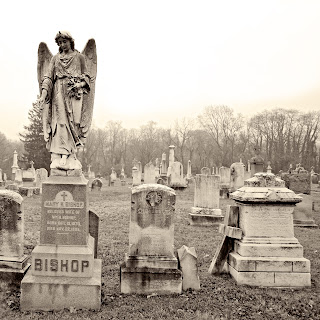 Though it’s a small space with only about 20 vendors, many of them the same year after year, it’s choice stuff.  Potter Elaine Ozol was there most years, with her wonderful pumpkin pots and moon mugs.  I went to college with her son and always enjoyed catching up.  My commercial-art teacher from high school, Ed Smith, sold his wicked cool clocks before he died.  He thought I was a weirdo, but I think he was weirder, and I loved that about him. Sandy Magsamen is there every year; she painted a cover of Joe, my coffee magazine; it’s hanging in my kitchen. The year before last, the Masking Tape Guy was there, and my mom commissioned my favorite present ever—a masking-tape portrait of me surrounded by crows. 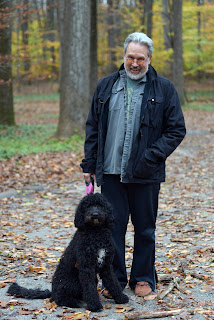 But she couldn’t make it this year; Mom was on Long Island at a bar mitzvah or something.  My sister was taking her boards so she could give Novocain needles.  I took my friend Kim, who’d never been—and who was a good sport when I made her traipse around the graveyard next door in the foggy cold.  When we got there, I checked in with the button lady on behalf of my mom.  She had a knowing look in her eye when she asked if everyone was OK.  I told her that my father had died, and we both cried a little.  She came out of the booth to hug me and tell me that she is now driving my uncle’s car after having answered an ad for it on Craigslist.

I bought a pair of earrings from Mary DeMarco, as usual, ogled some silver jewelry with birds on it, and got a WORD onesie for one of my dearest friends (who had her baby today!).  And then I visited the Hills.
Karen’s jewelry is more my mom’s style.  But last year, I fell in love with some single-strand love bead necklaces.  They were pricey, or I’d have bought one on the spot.  I have thought about it all year—always meant to ask about getting one at a because-I’m-a-weekly-shiatsu-customer discount.  Nearly every visit, I’d meditate on one of those necklaces, and I’d forget to ask.  There they were, still nearly $200 because of all the antique, 100+-year trade beads on them.  Maybe after Christmas, I said.  I couldn’t justify it right now.
I walked around a bit more and poked my head in the food area.  My mom and sister and I would usually get a snack there—a muffin or a cookie or some savory pie.  Those lunches were made by the former owners of Puffins, a vegetarian restaurant with some of the best food anywhere.  They and the Hills are best friends.  Their daughter was married to my father’s business partner until recently. 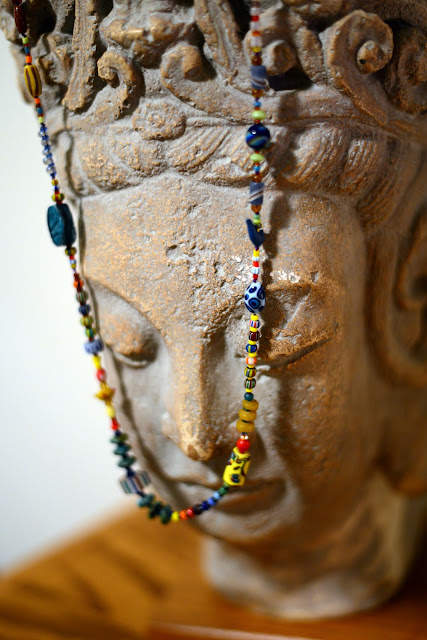 I introduced Kim to “my shiatsu guy” and Karen, and she went off to look for gifts.  Karen called me over with an offer.  “I want to trade you,” she said.  “One of these necklaces for one of your calendars.”  I laughed.  Ten calendars, she meant.  No.  She just wanted a new calendar, like the one I gave them last year.

I left with the necklace and plans to ritualize it.  I dunno—maybe I’ll wave some sage over it and say a prayer.  Jim tells me that the word for bead and the word for prayer are the same. (So prayer bead is redundant.)
I had a shiatsu treatment today, instead of my usual Thursday.  I asked Jim if I could take a picture of the Buddha head, and he finally corrected me: “Actually, she is Quan Yin, goddess of beauty and mercy.” Maybe he’d told me before, but I was too busy meditating on Buddha.
I took off my necklace and hung it on her, saying, “Maybe after they hang here for two hours, they’ll be infused with her mercy.  I’ll put the necklace back on, and my wrinkles will disappear.”
After the treatment, I put the necklace back on, and I smiled.

Now if that’s not a miracle, I don’t know what is.