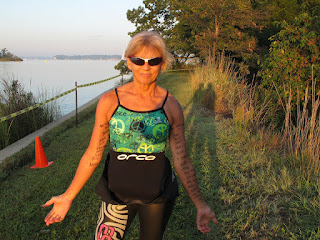 In a photograph, Susan Spence is wearing a green swimsuit covered with peace signs, her outstretched arms revealing names written in grease marker. These are the people for whom she will swim the open waters of the Chesapeake Bay: in honor of those on the left, in memory of those on the right.

She and her brother had returned to their childhood passion of swimming to assuage their grief and loss after a series of family tragedies. As a result of her participation in the Bay Swim, Susan was put on a mailing list announcing the inaugural Baltimore event for Swim Across America, a national organization donating to cancer research centers in major cities. When she read that it would benefit the Kimmel Center at Johns Hopkins, she was all in.

“I knew my return to swimming had a bigger purpose than just relieving stress,” Susan says. In September of 2006, she lost her sister, Chris Weitzel, to metastasized cancer, origins unknown, just six months after her diagnosis. Before she started treatment, however, Chris lost her husband, ostensibly to broken-heart-syndrome, so Sue accompanied her to chemo at Kimmel, where she says she was treated with compassion and professionalism.

Swim Across America was a convergence of her passion for swimming and her love for her sister.

Tomorrow is the anual event, and Susan, combining passion with cause, will continue her tradition of writing on her arms the names of those touched by cancer. “Unfortunately,” she says, “some of those people had moved over this past year to the ‘in memory of’ [arm].

This year, I am sorry to say that I have had to add to the lists on both arms, and my arms are not long enough.”

But they are strong.

When I wrote this Swim Across America story for Johns Hopkins  Magazine, Susan’s portion was cut.  She was my lede and my close.  Two days ago, I received an email from her that at least two more names would be added to her arms, one on each.  They are mine and my father’s.  Thank you, Susan.  Thank you.