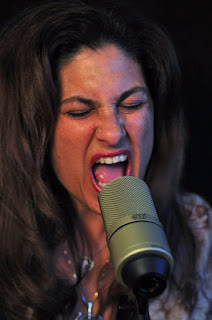 Long ago, when I was crazy and couldn’t sleep, my shrink, knowing of my life before baby, told me I needed to start writing poetry again or join a band. He believed insomnia to be a symptom of art withdrawal.

He was right. I had chosen the poetry, and my sleep was restored. I’d have started a band, too, except that I have crippling stage fright.

Back when I fronted Question 47 in the early eighties, we played out once or twice a week. I eased my fears with a gin and tonic or two, and I was usually comfortable by the third song. But I know alcohol only makes you think you sing great. Still, I pine for that unrequited love. I would rather sing and play guitar than do much else, even though I probably have no business doing it at all.

So here’s what happens to me when I get on stage—even to read poetry or give a lecture: My arms get heavy and numb, and they sting, as though the blood in my veins were plaster of Paris mixed with rubbing alcohol; my legs stiffen and cramp; my heart pounds out of my chest, and you can see it through my shirt like some kind of alien spawn; my voice shakes and quavers, and I can’t stay in pitch.

Because of my fear and lack of confidence, with the exception of one brief embarrassing moment at my daughter’s bat mitzvah last year, I’ve not sung in public since my old band days. Until Friday. 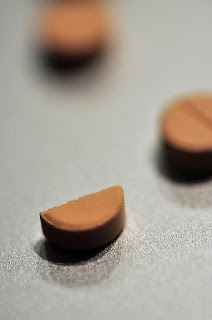 After a story on 60 Minutes awhile ago, I wondered about using Propranolol (Inderol), a beta blocker, to ease my stage fright. I mentioned it recently, and my best friend, a speech pathologist, admitted that she takes it when she has to give presentations. So I called my doctor. He gave me five tiny pills and the instruction to take half a pill one or two hours before my performance. Our school’s coffee house was 6-9; I took half a pill at 5.

At 8:15, my friend’s band announced that they were taking a break and asked if I wanted to play. I’d pretty much given up on that idea. But when Dave asked me again, I was up like a shot. If I was nervous for a moment, it’s a moment I don’t remember.

And it’s the only thing I don’t remember. The pill gave me some kind of super memory! I didn’t forget the chords or the words, even though we were playing a new song. And when someone asked us to play another, I did an original.

I’m not saying I was great; I wasn’t. But I didn’t suck, either, and that was enough to delight me. Maybe after a few of these little shows, my confidence can return.

I have enough pills for nine more gigs. And I plan to use them all.

This entry was posted in Uncategorized and tagged pill, sing, singer, song.