Yesterday, I got to spend some quality, albeit brief, time with an old friend and his wife. We met at Nick’s in Cross Street at noon and engaged in some laugh making, picture taking, Facebook posting, and two-fisted beer drinking. Despite the frenetic activity, not a drop of the 32-ounce trough of Flying Dog Pale Ale went anywhere but to my head.

We met when I was fourteen, some thirty-[inaudible mumbling] years ago. My best friend had just won 92 albums from WLPL (92 FM, of course), and I was the lucky bum who got to tag along. She and I were already cutting-edge ninth graders. We read Creem and Rock Scene and Circus. (We read Hit Parade, too, so we knew the lyrics to all the Aerosmith songs.)

We brought a shopping list. My girlfriend and I had seen pictures of the bands that made us swoon—The Sex Pistols, Richard Hell, the Damned, Television, the Stranglers—bands we couldn’t hear on the radio. So we went to Harmony Hut to get schooled. Ira Kessler was the teacher.

From that moment on, I was home, even if home sometimes meant my dark closet with Patti Smith’s Babel, a thesaurus, a notebook, and a pen.

I can’t give Ira all the credit; I’d have found my way eventually. But that hour or so in Harmony Hut was a defining moment in my life. 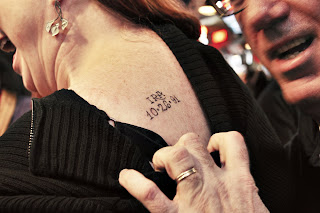 Ira never left behind his career in music, even though he left behind Baltimore for Connecticut and, finally, New York. But in the early eighties, he and I were both in bands at the same time (his, Boy Meets Girl, and mine, Question 47, played many shows together). He’s worked in the recording industry since his stint at Harmony Hut in Security Square Mall, and it was his first record company’s reunion that brought him back to town after a couple years away.

One afternoon with his wife, Lori, proves that Ira’s taste is still impeccable.

With maybe one exception: thirty-two ounces of Yuengling? Maybe it’s a nostalgia thing. But he must now attend FuquinALE!, my seminar. And he might have to stay after class to exorcise those lager demons.

This entry was posted in Uncategorized and tagged defining moment, harmony hut.