how I feel about that 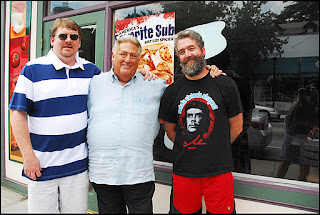 It may surprise people to know this, but I used to go to a shrink. Another surprise: it was not because I’m crazy; I just forgot how to sleep.

Therapy isn’t like the olden days, when you were asked how you feel about that by a bearded and bespectacled older man, who encouraged you to badmouth your mother and talk about your dreams and return weekly for the rest of your life. You deal with each crisis as it comes, with months, even years, of untherapeutic living in between. That’s how it was with me. I’d get nervous about something, stop sleeping, and make an appointment.

In one session, I talked about my father. I was troubled by one of his oft-repeated offers: “You want it? I’ll buy it.” Truth is there was no question; it was more of a run-on sentence.

Dad would utter this for everything while we were on vacation—often, embarrassingly, in front of a store owner to whom I was only being polite when I said those fancy jeans were cool. (A $250 pair of jeans is not cool.) While I was never rolling in dough, I would still sneak away to buy, with my own money, the things I wanted or needed—even when I was forty.

When Beth and I were kids, our family was lower than lower-middle class. But we didn’t know we were poor because we had everything: tiny black and white Luskin’s TVs and Realistic stereos and shag carpeting in our bedrooms. I had a pink princess phone, and my sister had a regular blue one. I wanted to go to NYU for college, but my dad said it would kill my mother if I left, so he bought me a car as a bribe. After he did, we couldn’t even afford Towson University, which was only about $20 a credit back then. My great aunt paid my tuition for a year, and I didn’t find out until a decade or more later.

When I discovered how poor we really were back then (after hearing stories about my mom hocking her engagement ring to pay the phone bill), I assumed we’d had all those things because my dad didn’t want us to know we were poor. But maybe it was because he traveled often and felt like it was the only way he could show his affection, since time with us was not an option.

But twenty years ago, he began doing well in his career. He was home, but we were gone. And the gifts got bigger. And as his generosity grew, so did his insistence that we accept his offers.

“You want it I’ll buy it” became his mantra. He didn’t want his girls to go without anything. I was pregnant, and my dad didn’t want me to fix the carburetor of my six-year-old, paid-off Honda Civic; I needed a new $35,000 Pathfinder. He paid most of the lease.

Critics—my friends, my brother-in-law, even my husband—thought I was spoiled. Marty and I would argue about it at the dinner table—about how many times I said no to something before I was just plain worn out. The badgering was relentless. I said no to a new car at least a dozen times. “I hate to see you drive that thing. It’s not safe for my grandchild,” he would tell me, often before hello.

What I learned in therapy was that this was how my father said he loved us. Saying no to his gifts was the equivalent of rejecting his love. So I began handling it differently, bartering, accepting a few offers with effusive gratitude. I promised I would let my father know when I found something I really wanted. I even began asking for things I needed.

This is one reason I worry so much about him now. Since his last cancer treatment, he has become so weak and sick. He was still going to work through his third chemotherapy infusion. In fact, I can’t remember him missing work or even being sick with a cold more than a handful of times in my life, except for surgeries on his broken leg. But he’s not been to his office since October. In the hospital and at rehab these months, he sometimes just stared into space, not even turning on the TV, not reading a book or a magazine.

If he’s not at work—where he feels valuable and important—he’s not maintaining his income. And he’s not able to offer us gifts to let us know he loves us.

At almost 75, he is finally realizing that we know. We have always known.

A little more about my dad here.

This entry was posted in Uncategorized and tagged dad, father, love, money.