my baby, he wrote me a letter! 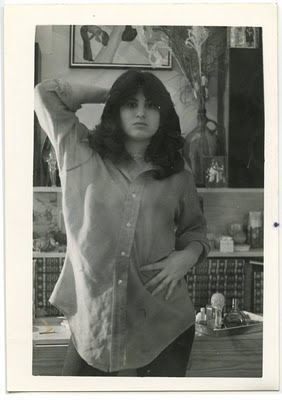 When I was fourteen or so, I put a free pen pal ad in the back of Rock Scene Magazine—something about Cheap Trick girl seeks fans of same. Perhaps I made mention of some other band, like Foreigner.1 Perhaps I signed my name Rainbow Leigh or Crystal Leigh.2

Those were the days when a teenage girl could publish her real address with a fake stripper name in a national magazine without alerting any pedophiles3 (unless you count the rock stars, who had groupies my age). I got lots of replies, including a string of post cards from Rick Nielsen, who was flattered at first but then annoyed by all my questions. I wrote to (we called it “writing to” back then and would often say, “Do you write to so-and-so?”) Becky Olenchak, June Feinstein, Cathy Pearce, Dan Bonham, and a handful of other really cool teenagers and twenty-somethings, who helped me get through the hell of high school. We met in real life, too, at various locales like New York’s Bleecker Street and St. Marks Place and the Rock and Roll Convention in Philly (the Ramones played!). Within weeks of getting my first car—a two-tone Mustang hatchback—at 16 or 17, with no such thing as a cell phone, I drove to Cathy’s house in Lynchburg. 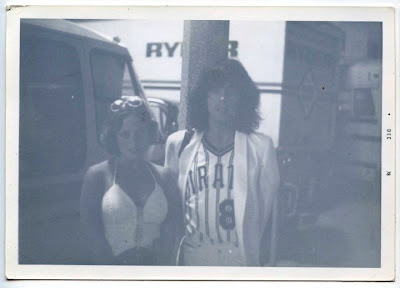 Music was my passion. I did little else then but write death poetry and play Patti Smith’s Radio Ethiopia over and over again and check the mailbox. The mailman brought me stuffed-full letters every day and would often leave big packages for me by the door of my apartment—bootlegs and imports of the Ramones or the Runaways in Japan, groovy singles like the neon yellow “Nasty, Nice” by Jane Eyre and the Belvederes. The best days were when I got home from school and found a letter from Becky, who’d tell me about her exploits with some famous-to-us rock star of extraordinary hotness, with photographic evidence tucked in the stationery; I looked at it first, foreplay.

Although the thrill of getting the mail dies with your first credit card statement, every once in awhile, I’ll get something cool from my Internet friends—beautiful photos and paintings and post cards, care packages from all over the world. But I don’t get any Slam books anymore. I rarely get a letter in longhand. 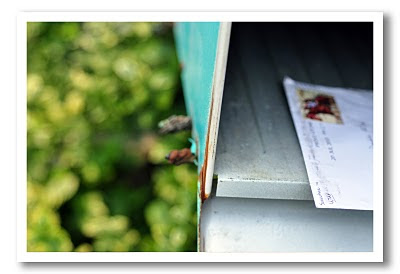 Last week’s letter from my husband might have been the first one in years. Marty’s been away for nearly two weeks. He doesn’t have a cell phone, and I can’t blame him; my own preoccupation with connectivity needs to be checked. But when he’s out there in the wilderness of Utah, I worry for him—the flash floods, the heights, the heat. And it’s sometimes annoying that I can’t catch him up on life back home. But I know he deserves the solitude and isolation. This is how he recharges his own cells: hiking the Watchman trail, wading through the Narrows, swimming in the frigid Kolab Reservoir of Zion Canyon. He wakes up before dawn and makes coffee, takes his book and his guitar out to a spectacular overlook, and reads, strums, thinks. He writes poetry in his head and music in his heart. He’s there for every sunset, too. And I envy the person who could do this alone.

It had been several days since we’d put him on the plane, and the only contact we had was a ten-second call from a stranger’s cellphone. He said, “Serena, I’m on top of Angel’s Landing,” and the signal was lost.

The next day, though, a two-page (fronts and backs) letter came.4 Marty wrote it after he checked into the hotel in Mesquite before heading out to Zion in the morning. He began:

But wait! What about the MAIL? Remember—“my baby, she wrote me a letter”? Yeah…I’ll talk to you the ol’ fashioned way. 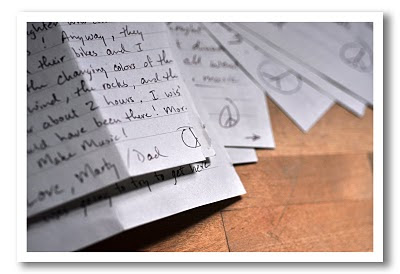 The rest of it was details of the flight, the weather forecast (it’s always 115 when he lands in Vegas), his hopes for the trip, a request for us to “play music!” and a peace sign. A day or two later, a three-page letter arrived. It was on the same lined paper, ripped out of a bound journal, and it ended with the usual peace sign and a reminder to play music. On Monday, we got another letter, ripped more sloppily so that we had to fill in the words on the edge, Serena and I sharing the pages and reading like it were an adventure, like we were some sort of pioneers who received the note by pony. This one was written at the site of the Mountain Meadows Massacre, Marty recounting the story of slaughtered women and children. It started on a bummer but ended with his having held an impromptu concert at the top of [secret camping location] for a troop of teenage bicyclists and their chaperones on their summer adventure program. “Make music!” he said again at the end, the peace sign torn at the edge.

Since the first letter, I’ve been singing the song Alex Chilton wrote and performed with the Box Tops when he was just sixteen. And yesterday, one of the School of Rock show directors asked my daughter to play the sax solo in Joe Cocker’s version of “The Letter.”

And now, ten days after he flew off, I’m sitting here in the kitchen, waiting for the mailman. I have checked the box three times today, even though I’ve heard no squeak of metal on metal, no rusty door opening, no sound of papers becoming suffocated, no rusty door closing.

Our mailbox is sixteen years old, a wedding gift from a friend. It used to have a wooden frog head and four wooden frog feet, but they rotted long ago—perhaps when the mail itself rotted. It used to be so much more than bills, credit card offers, and circulars for places with mediocre pizza and Chinese food. I’ve wanted to replace the box, maybe build some mosaic masterpiece, but the junk that comes never seems worthy.

And now I regret not having something more beautiful and protective for these rare treasures, words from someone I love, though I know a fancy box is more likely to attract thieves and vandals and less likely to summon something so precious. We should remedy the latter.

A few days ago, Marty borrowed another stranger’s phone. They’d just finished having dinner together, and he talked to us for what seemed like an hour, apologizing to the man at regular intervals for the length of his call. He said he’d written a letter just for me—a separate letter not signed Marty/Dad. And I couldn’t wait to get it.

I nearly held my breath at the mailbox this afternoon, but the only things inside were the latest Musician’s Friend and Guitar Center catalogs and a circular for some lame pizza joint.

3There were some pervs, though, including a guy named Phil, who used to request worn underwear in exchange for records and, sometimes, cash. My mom corresponded with him for a time, pretending to be a teenage girl. He was mad when he found out she was my mom, but he didn’t come to our apartment with an axe.

4Also in the mail was a $40 speeding ticket, only my third in my life; my first came when I was sixteen and on my way to Cathy Pearce’s house.5

5My second was on Stevenson Lane, driving really fast when I’d decided to close my health food store. I was listening to “Gravedigger” and crying. And that’s what I told the cop, who gave me the ticket anyway.