the order of the teen-ix (xii) 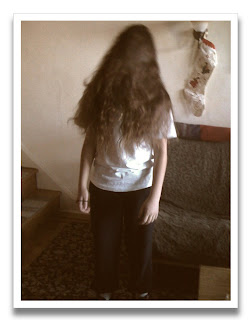 This is where it starts to get hairy, literally. On Wednesday, my eleven-year-old daughter became—whisper it—twelve.

On Twelfth Night, the anniversary of my own epiphany, Serena Joy Utah Miller began her after-dinner chores by dropping my new butter dish. It was an accident of course, but I was a little loud about it; I’d finally replaced the one my husband chipped in 1995.* The lid of the new dish was unharmed, but I tossed it in the trash along with the bottom in a heap of exasperation, then restored the chipped pink butter dish, a wedding gift to us, to its former spot of glory on the counter.

The next night, while cleaning up from dinner (the previous night’s leftovers of beef stew and cheese bread), Serena dropped the lid of the old butter dish, which shattered into tiny pieces on the tile floor. We all erupted momentarily, under the impression that our daughter was spending too much time watching TV and playing games on the computer, because clearly she’d lost her ability to pay attention to what she’s doing.

Then it hit me: the yelling, the inattentiveness, the rolled eyes, the appearance of humiliation when we speak to her friends, and the kicker—Wockenfuss chocolates for breakfast. I smiled the all-knowing mom smile, fished the blue lid out of the trash, washed it, and placed it on the pink base. (Now I have a hideous, mismatched butter dish, and, with my luck, no one will break it.) I decided Serena should call her band Butter Finger. She cried. As I hugged her, I wondered how much longer she’d let me. 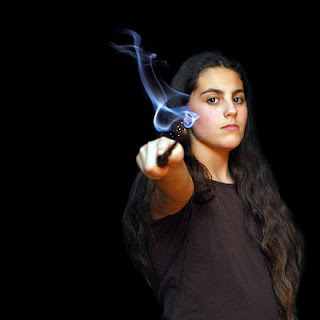 Unlike eleven, twelve is not merely “one louder.” It is what Bob Schneider posted as his Facebook status update and what the tabloids have called Lindsay Lohan and her ilk: a drama tornado. The way I deal with anything these days in this, the year of my annoying positivity (which, incidentally, is lost on my family) is to write a song about it.

“Hurricane Serena blew into town / like a hundred cannonballs / she touched down / now she’s raining axe handles / and barn doors / and I can’t find my little girl anymore.” Chorus: “a drama tornado / whisked away my daughter / dropped a house upon her / now she is a goner.”

Last night, after some random disagreement, I gave her a belated birthday present—the DVD of Harry Potter and the Half-Blood Prince. She said, “You didn’t need to get me anything. The Les Paul is sort of holding me over.” I saw a glimmer of my daughter under all that brand-spanking-new twelve-ness. Then she looked down at the movie in her hand and, in a moment of perfect self-realization, declared, “Oh my God! I am Hormone-y Granger!”

I am still waiting for the Dark Mark to appear, waiting for the Hairy Potters to dazzle her with their magic, waiting for her to choose some creep I’ll call “He Who Must Not Be Named.” But it won’t be long. The boy who asked her to the dance surprised her with a set of guitar strings and designer picks. And I hear things breaking in the distance. And 15 chocolates are now missing from the Wockenfuss box.

* We still argue about who’s responsible, like it matters when you’ve been together for 27 years. (He is.)

P.S. If you like my writing and can spare a minute, please vote for me. I’m not exactly a Mommy blogger (and I hate popularity contests because I’m unpopular), but what I write is informed by motherhood, as well as wifeliness, writership, and rockerism.