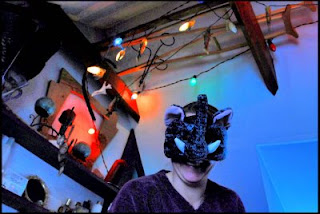 I’ve known Christine for nearly a quarter century, and she’s always been extraordinary. You could tell by looking at her that she didn’t merely walk on the wild side; she practically invented it. People say I’m creative. But that’s what you say about people who can cut and paste. Christine is an alchemist. She a transmitter and a transducer. She harnesses energy from things you can’t see, scoops it like some flocculent mass, then molds it into a tight little invisible ball. Best of all, she puts it inside other people.

She has put it inside me.

Some people have lucky charms—jewelry, amulets, smooth stones, even clothing. (My brother-in-law wore the same shirt every day under his work clothes during the Baltimore Ravens’ last winning streak; alas, a shirt is only so powerful.)

But Christine is more than a lucky charm. She’s a magic spell. She’s who I call when things get serious. 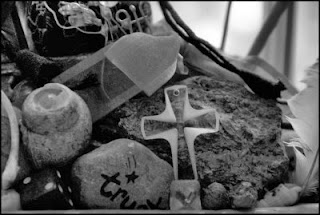 Think of anything you know about power—powerful medicine, powerful weaponry, powerful machines—and you’ll understand why I save her for last. You don’t want lead anchor to squash a spider. You don’t need a power washer to rinse your veggies. And you don’t take narcotics for a sore throat. Calling Chris is like taking out the big guns.

About fifteen years ago, she began coursework at the Baltimore School of Massage, and Marty and I were her pampered lab rats. We endured hours of free massage while she perfected her strokes and tried out new moves. When she started energy work, Marty took a pass. We both like touching better. This stuff is like a promise unfulfilled. Her strong hands hovered over the sore spots on my back, beating their wings but never touching down. She was a tease.

She went on to pass her tests and build her client list and make a slew of new, odd associates who were all introduced as “my friend” [Esmerelda]. When they stood together, I could feel them like a force field, an invisible shield. But Christine didn’t exclude me. In fact, she was there at 5:00 a.m., in the hospital, while I was in labor with Serena. She put me in stillpoint, which is a craniosacral method of harnessing the energy coursing through your body and gently forcing it into a steady and peaceful rhythm. Though it isn’t physical kneading, it’s a hypnotic. You can’t help but stop.

When I suffered with insomnia, Chris went from big gun to atomic bomb. On my first visit after my first week of no sleep, she took my ankles in her hands, closed her eyes, and asked me a question. “What does it mean—‘I’m not there yet’?”

I scrunched my face in befuddlement. 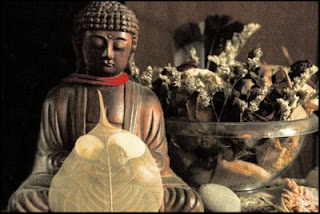 “That’s what I’m getting. That’s my read on you,” she said. When had she begun talking that way? I had barely accepted the waving crystal over my belly, and now I was forced to come to terms with Chris “reading” me. So I made something up—that I’m not famous, I’m not a famous poet, I don’t have a book published. I truly didn’t know what she was talking about.

When I got home that evening, an email waited for me. Subject: you’re not there yet. At the time, I was working on a job for a marketing company, and our tag line was “Are we there yet?” How did she know that? How did she know that while I wasn’t even thinking about it? The moment I saw that subject line, I cried. It was as if my best friend had become a—a psychic! I called her, hysterical. “What are you?” I asked her, accusing her. While I wasn’t looking, she had become a full-fledged healer. She’d found a way to train all the random odd bits of her to do this stuff. “Are you a witch?” I demanded. 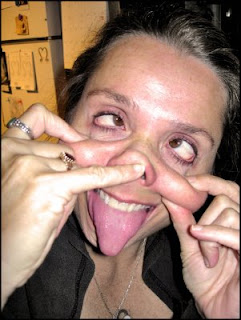 So Christine has treated me during my worst, most painful times. Sometimes it’s too late. And sometimes it’s by accident. She called last week, and I begged her to visit. Her schedule has her working long hours with autistic children at Kennedy Krieger, as well as treating her regular clients. She was finally able to get here Monday, and it was like letting out held breath. She always makes me laugh, even when I’m imperious to joy. I showed off my daughter, got indignant with her over a loved one’s behavior, listened to her mangled jokes and stories about becoming queen of yet another kind of massage, and shared my own good accomplishments.

And then, before she left, she put her hands on the spot. She felt around the incision and marveled at its neatness and good healing. And then, with her hands on the surface of my skin, skimming it like a bug on a summer pond, she went inside me with her mind. She tiptoed a route through my tissue and muscles. She fiddled and faddled and hocused and pocused. Suddenly I got a little dizzy and nauseated, but I said nothing, thinking it was standing or the meds. Then she asked whether I was nauseated or dizzy, and I was almost relieved, even though this stuff still scares the piss out of me. She talked about draining my lymph nodes or whatever—I never understand half of what she tells me. I just know that, whether I believe it in or not, she’s doing it.

Christine hugged me goodbye, and there is magic even in her hug. Her arms squeeze the demons from you, and I would swear to that in a court of law as well as a nonfiction essay, and I would not be taken down by Oprah or Goucher’s Creative Nonfiction program because it’s true.

Before she left, I reached around my mountain of leftover scarves and grabbed the one she’d admired when she came in—a red, black, and white one with balls and fluff and poofs and glitter. She said it matched her new hat. I don’t know whether she told me that because she wanted it or just as a matter of fact, but I knew she needed the scarf. I made her wait while I hobbled around my maze of boxes of yarn and put it around her.

This was more than a gift to a friend. It was a sacrifice to the goddess. 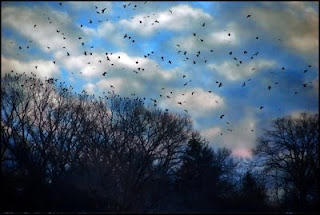 Christine is the belly of the Buddha. She is the Shroud of Turin. She’s the Virgin Mary on Toast. She’s the dozens of four-leaf clovers she’s found (several in my presence—just looked down, and there they were). She holds more magic than a sky full of crows.

The next day, I stood straighter. I had less pain. I moved more. I can’t wait for another dose of her friendship.

This entry was posted in Uncategorized and tagged essay, friendship, magic, psychic.