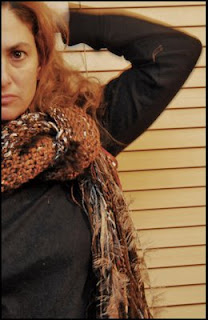 This old poem about knitting and unknitting, pulling together and coming undone, seems to suit me right now. I’m whipping yarns into a frenzy while I’m stuck in a chair and using the knitting to keep me sane. Of course, it’s an expensive hobby, and I’m not working, so I’m selling all the scarves at my etsy shop, if you are interested. I’m not exactly a charity case, but when you buy one, you get a fabulous scarf that will last forever (and people will point and stare—in a good way—so be prepared) and you keep me from, well, unraveling.

It’s not as easy as you think
to unravel the half-done coat—
the mohair enmeshed with wool,
the intertwined tweed and Wintuck
(in colors so promising you use it
though you know it pills).

It’s not as easy as you think
to unravel a foot of coat
with so much time invested,
so much counting of rows
and place holding,
so many plastic rings slipping
from needle to needle,
the saved-for-later stitches
held gingerly on a spare rod,
the book buckled
with folded graph paper
from the chart you made.

Even when you make a mistake,
it’s not as easy as you think
to unravel without dropping
or twisting the tiny knit or purl
(though my Grammy,
the first multi-tasker,
could do it blindfolded
playing bridge).

But it’s been years
since you’ve picked up stitches,
added a row, tied on a color.
And each time you take those
good intentions from their pouch,
it takes an afternoon
just to find your place.

It takes days
to get the rhythm back.
And the rows are long.

And now you just want to tear at it,
just want to rip the whole thing out—
annihilate its order,
erase the time spent,
destroy its memory.
So you pull that string,
your arms, long and flailing;
the yarn, a mass of tangles,
miles of lunatic fringe;
and you, the star of this
hysterical knitting drama.

But it’s not as easy as it looks
to unravel the half-unraveled coat,
as the knots of each tied on color
catch on the permanent waves
of seven years in stockinette stitch captivity,
seven years of almost-coat-ness,
seven years of the broken promises
of a button placket,
a lining,
a cool fall day.

No, it’s not as easy as it looks
to unravel.

This entry was posted in Uncategorized and tagged audio, knitting, poem.