they catch bad guys, don’t they? 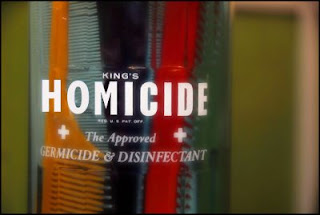 I have a television in my bedroom. I borrowed it from my sister, who upgraded. I used to bring the kitchen TV upstairs when my husband was out of town; I liked the company. But it was heavy, and I got tired of carrying it up and down the stairs. Besides, I have my own room, and it can have its own TV.

Back when we were twenty-something, Marty and I had a little black and white TV in our bedroom on 27th Street in Remington. I don’t remember what we watched—LA Law and NYPD Blue, probably—but I do remember that our roommate, an unemployed used car salesman, used to take that TV from our room while we were at work so that he could stay in his room all day, freebasing cocaine and peeing in a one-gallon apple cider jug. Imagine the day I came home and searched the house for that little TV only to find it illuminating the tighty whities of our roommate, a giant bottle of urine next to his bed. He muttered an apology, but he still stole it every day, even rummaging through my things when I hid it from him.

When we moved, we got a bigger TV, and the little one went in the den. (The roommate did not come with us.)

I never used to watch the tube a lot, though I confess to having a thing for the various incarnations of The People’s Court. Winter nights for the past fifteen years have always been capped with an hour-long soak in the tub with a good book. But since I put my sister’s TV in my bedroom, I’ve all but stopped reading and bathing. Instead, I get in bed and watch the cop shows—CSI, Law and Order, Without a Trace, Cold Case. If it’s got a bad guy and airs between nine and eleven, it’s on in my bedroom.

My husband hates it. He wants to be the only bad guy in my bedroom. Instead, he comes in to say his passive-aggressive goodnight before filling the adjacent room with hurricane-force snores.

You’d think that all these shootings and robberies and rapes and murders would keep me up nights, but I actually sleep a little better. In the past few weeks, in fact, something odd has happened. I can’t seem to stay awake for the ends of the shows. I’ve been falling asleep at quarter of ten and quarter of eleven, just before they catch the bad guys. I’ve seen magicians die, their killers disappear. I’ve seen kids get lost but never found. I’ve seen cops almost get their man. Then it’s all blank, and I wake up in time for the next show’s theme song.

You’d think this would have some kind of effect on me—that I would have begun to lose my faith in law enforcement or that I’d be worried all the time. Nuh-uh. The fact that TV shows no longer resolve has not made a

This entry was posted in Uncategorized and tagged essay, television, TV.