“On a scale of one to—” the triage nurse begins.

“Nine,” I say, scanning the room for a chart. I find two, and point out one to my husband, who is confused by my numerical outburst. He has seen an ER from a patient’s point of view maybe once since I’ve known him. The chart, in case you don’t know, is a series of circular cartoon faces, the first of which is happy to be alive because he has “no hurt.” What follows are varying degrees of suck: hurts a little, hurts a little more, hurts even more, hurts a whole lot. Ten is crying. He “hurts worst.”

I had been crying for days. My back had begun interfering with my life about a month ago, and I blamed it on my sixty-year-old mattress (I believe my husband was conceived in this very bad, on this very ancient Serta). So one night at eleven, I went to Overstock.com and bought a memory foam mattress. Comfortable as it is, my back did not respond. I could barely walk last Friday, when I went to see the chiropractor. And when we were finished, I couldn’t walk. I stood in the middle of the Belvedere Square parking lot, crying on my cell phone for my husband to come scrape me off the wheels of the next oncoming car. By Sunday morning, I was ready for pills.

“See, if my pain were a ten,” I tell the nurse and Marty, “I’d have a gun in my hand.” They both smile. “You don’t see the gun on the chart because they only show the face. He obviously hasn’t put it up to his head yet.”

Those faces—called the Wong-Baker FACES Pain Rating Scale—are at just about every hospital and pain management center across the country. They were devised by Donna Wong and Connie Baker, who frequently saw young burn victims who had trouble communicating their pain. Wong, a nurse consultant, and Baker, a child life specialist, had children fill in the faces in the pain scale, and a pattern developed—the shapes of the eyes, the mouth, and the nose in various stages of distress had similarities. A professional artist rendered the final version. Those pain charts are now used for adults, too, and in hospitals everywhere. 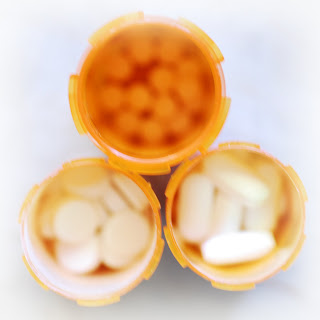 What makes my pain a nine instead of an eight or a seven? For one thing, my personal pain chart doesn’t go down to a one. Each day for me is a five, and I’m not just saying this because I’m a typical Jewish hypochondriac, dyed in the wool (with red dye #3, hence the cancer I probably have) by my own father.

About twenty years ago, I made my dad a t-shirt designed to look like a rock band’s tour souvenir. IHADTHAT, it said, with World Tour 1988 below. On the back, over a caduceus, what looked like tour cities was really a list of all the illnesses my father had or claimed to have had in his lifetime, from acid reflux to yeast.

The scary thing is that, at forty-five, I may have visited more cities. 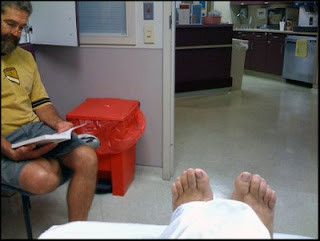 My exam by the doctor is brief but delightful. He tells me to visit one particular restaurant in New Orleans, but I am to go to the side door and mention my waiter, Pierre. I can flip the bird to all those suckers waiting in line at the front door. (The doctor doesn’t say this, but I imagine they are a bunch of rich tourists, and that’s what I feel like doing at the moment, OK? I’m in pain here.)

In case you’re lost, the ER doc, who looks a bit like a pleasant version of Garrison Keillor, is speaking metaphorically. He wants me to see the nurse practitioner at the orthopedics office; that will get me in faster than if I were to try to schedule an appointment with a doctor. The N.P. is the side door.

The nurse brings me a percocet, and I insist on cutting it in half. Thirty minutes later, when I start to cry again, she returns and practically orders me to take the other half. I do. And I realize this anti-pain culture has some important functions. When patients cry and moan, it scares the other patients. This is especially true at the dentist. Face it—you do not want to sit in that chair next! Your vocalized pain also stresses out the nurses, who do nothing for you except adjust your bed or give you a pillow. So pain relief helps all the people around you, even if it does nothing but blur your vision and cloud your judgment.

I leave all doped up, almost fainting and vomiting several times on the way out.

I spend much of Tuesday on the phone, trying to get an appointment with someone right away, trying to find a sympathetic soul. My dad knows a back surgeon’s father and puts a call in for me. It’s just what I need. The secretary talks to my insurance company and secures me a next-day MRI. The catch? Because there is always a catch. It may be three weeks before I see this very popular doctor. I cry again because there is sometimes power in being pitiful. “When you get the results, will you at least call me and tell me what I should be doing for those three weeks? Because I can’t just sit here and be in pain and crippled.” 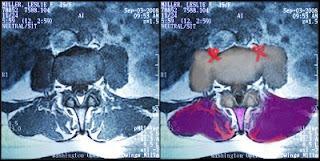 On Wednesday, my maternal chauffeur drives me to the MRI. I hold up the films as we drive home with the top of her bitchin’ convertible down. All kinds of demons reside in my spine: a bat, a Muppet, and an evil poodle. I put the films away and check my messages to find one from Pierre—the waiter in that New Orleans restaurant! He can see me at 1:30!

I briefly consider the ethics of my dilemma. Do I wait weeks for the other doctor, whose office helped me get the MRI? Or do I learn my fate today, in just two hours?

Kathy Mulford pins up my spine pictures and proclaims that I have a severely herniated disk, at least a year in the making.

“Imagine an Oreo,” she tells me. The pain relievers and anti-inflammatories have made me ravenous, so I have no trouble picturing the cookie, which has a bite taken out of it. “Your vertebrae are the cookie pieces; the creamy filling is the disk. When you smoosh the cookies together, the filling oozes out.” Or it would ooze out, if Nabisco weren’t so stingy with the creamy filling. She points to the spinal canal, where some creamy white filling has leaked, and explains that my nerves are in that canal, and the spongy disk is bearing down on them.

This morning, I start my new regimen of Medrol dose pack and percocet, a delicious cocktail. Next week, I get a shot of cortisone in my spine. Maybe then I’ll be able to walk.

Through the din of pain and the fog of pain medicine, I have found the moral of this story: Go in any door that’s open, and keep your creamy white filling where it belongs.

This entry was posted in Uncategorized and tagged essay pain.