I’m here in Listowel, Ireland thinking about thanks and possessed of a sublime gratitude. Last night, my daughter and nephew sang in my sister’s living room, and Beth shared it on my Facebook wall. It was the next best thing to being there. After nine days away, and especially on the holiday named for the gratitude we all possess but lose sight of sometimes, I ached for home. 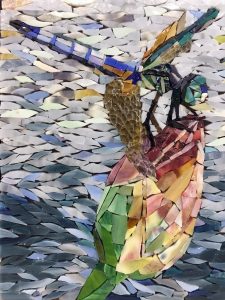 But my Thanksgiving was extraordinary, even by tourist standards. I awoke at 8:00 and cooked scrambled eggs and salmon for me and Carol, my perfect housemate for these two weeks in Listowel, and finished gluing my mosaic. At 3:30, I walked over to Mike the Pies, a well-respected music venue and pub, where I got to watch a Mannequin Challenge reboot—and see it filmed for live TV, meet the journalist and crew, talk to the bar patrons, and introduce myself to the band I am supposed to be shooting the next day.

An older Irishman sitting with friends tells me to smile, which I don’t tolerate well. I have been smiling and standing all afternoon and am just trying to comfort my back, which has ached from sunup to sunup since the start of my journey. I oblige with an exaggerated grin but joke about not smiling because I’m an American unhappy with the direction of my country. This leads to a good political discussion about the Electoral College and gives me a chance to accentuate the positive attributes of Hillary Clinton with the man, who doesn’t like either candidate but says that our election of Donald Trump has made us the laughingstock of the world. Before we part, I snap a photo of him.

Carol and I have a quiet pizza dinner in the apartment, take-away from the always-crowded pizzeria next door (it needs sauce but is otherwise pizza) before heading back to Mike the Pies, where the band Wyvern Lingo is set to perform.

A few of the same patrons are still at the bar. One of them, an Englishman, is a Trump and Brexit supporter (they seem to go hand-in-hand); the other is an older Irishman drinking Coors Light with ice. Carol and I speak with the group, which includes the Englishman’s wife, for a long time, laughing uproariously at times, sharing stories about ourselves, and generally enjoying each other’s company (I thought). We talk about geography and distance, favorite books and authors, English television shows, weather, politics—typical pub fare.

The Englishman says that he’s found all Americans to be either Irish or Italian, wants to know if that’s true.

Because of who I am, I do what my mother might have advised against: I tell the man that I’m neither Irish nor Italian. “I’m Jewish,” I say. 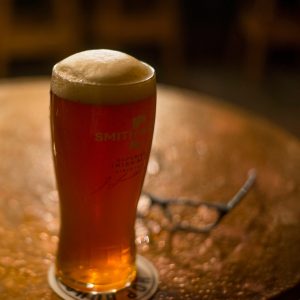 His English friend rebukes him sharply in an instant, then implores him: “Tell her why. Tell her.” He turns to me and says, “He doesn’t like Jews because he was in the IRA, and they used to buy arms from Palestinians.” Whatever. I’m not having it. Whether you’re seven or seventy, you’re getting schooled.

“Were we not just having a lovely talk?,” I ask him. “Did we not enjoy each other’s company and conversation this afternoon?” More than anger or sadness, I feel wounded, and I’m nervous, but not on the verge of tears. “I don’t know how you can say that,” I tell him. Carol [admits, confesses, comes clean about] her Judaism, too.

He says, “I’ll tell you why I don’t like the Jews.” He sits quietly for minutes. “I’ll tell you why.” He can’t think of a reason. At least he can’t say it. And he doesn’t. More rebukes from his friend follow. (The Englishman’s wife just shakes her head from time to time.)

“What a conversation killer that was!” I exclaim. “I guess it’s a good time to announce that I have cancer.” No one seems to hear me (for those who don’t know me, I do have cancer, but just a little), and the subject is no longer the horrible Jews. 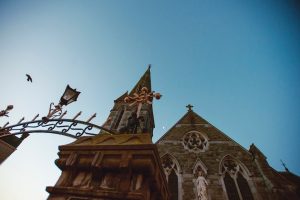 A little while later, the Irishman asks if I believe in god. I have to laugh because I’m about to disappoint him yet again. He takes my hand and smooths it with his finger. “Are you blessing me?” I ask, laughing. He says, “Something like it.” He tells me that when something bad happens to me, like when I’m old and get sick, I’ll remember that thing he just did, and I’ll know that God will take care of me and keep me from harm.

I consider this his apology, his way of making amends. That’s at least how I’m going to think of it.

Hatred is a complicated concept. It’s a dislike beyond revulsion. Holding people in contempt because they have a god or a skin color or a language or a body that’s different from our own is almost always a question of preconceived ideas rather than experiences. How is it that we are taught to hate through words but taught to love through experience? I guess that’s the pussy of an answer, isn’t it? That we meet hate with love? I can’t do that, either.

Wendell Berry wrote the following poem with a dedication to his granddaughters, who’d visited the Holocaust Museum on the day Yitzhak Rabin was buried:

Now you know the worst
we humans have to know
about ourselves, and I am sorry,

for I know that you will be afraid.
To those of our bodies given
without pity to be burned, I know there is no answer
but loving one another,
even our enemies, and this is hard.
But remember:
when a man of war becomes a man of peace,
he gives a light, divine

though it is also human.
When a man of peace is killed
by a man of war, he gives a light.

You do not have to walk in darkness.
If you will have the courage for love,
you may walk in light. It will be

the light of those who have suffered
for peace. It will be
your light.

While I don’t stand fully in that light, I know that Carol and I have made a small difference tonight when both the Englishman and the Irishman tell us they hope to run into us again before we leave Listowel for good.

But we are here at Mike the Pies for the music from a talented trio called Wyvern Lingo. I’d first heard of them a few months ago while I was looking up the solo work of people who have been associated with Hozier, whose first album is probably the best thing recorded in the last 20 years. When I learned that I would be coming to Ireland, I looked into the bands that would be playing and was shocked to learn that Wyvern Lingo would be in the very town where I was staying, and on Thanksgiving night. I literally jumped up and down in the kitchen when I discovered it, then wrote to Aidan, the bar’s owner, begging for tickets, then wrote to Carol to tell her she had Thanksgiving plans whether she liked it or not.

We are still high from the singing angels who are otherwise known as Karen, Saoirse (say SIR-sha), and Caoimhe (say QUEE-va). For a little over an hour, they perform most of their own songs plus three covers, which include an Alt-J mashup, Prince’s “When Doves Cry,” and Joni Mitchell’s “The River,” which finally does me in. Something is bound to make me cry this trip besides getting clunked on the head with my comb in the shower.

Since I’m here to be an “artist” of some sort, my goal with this trip was to make art—to write, to mosaic, and to shoot. I especially wanted to hone my portrait skills, so I had messaged the band before coming to Listowel to see if they could accommodate me.

(Aside: I know what you’re thinking: I thought you don’t work for free. Correct. Something of value must be traded for something of value, usually product for money. This is, for me, an equal trade.)

After the show, I make plans to meet the women by the church in the square, and I buy two CDs and a t-shirt, which I wear to bed. I sleep and dream that I am singing.

Check out their acapella version of their song “Used” from last night.